Since time immemorial, kids have always gone to that one house that gave out crappy candy.  In the Roman Empire, when children dressed as Gladiators or their favorite Caesar for Halloween, no treat was as reviled as salted bark, which is exactly what it sounds like.  In ancient Ireland, if you gave out dried goat testes on Samhain, the kids would beat you on the head, throw you in a wicker man, and burn your motherfucking ass.  Chinese kids from the Han Dynasty were known to give adults the five-finger death punch if they put ox dung covered in birdseed in their emptied rice bags.

Okay, so I made that shit up, but I know that everyone who has ever gone Trick-or-Treating has come across some nasty ass candy in their bucket.  While it doesn't really ruin the Halloween festivities, it does make the next couple of days a dangerous trek through Candy Land.

Some of the hazards of sifting through your stash are easily avoidable.  If you've ever had a dentist in your neighborhood, you got either a toothbrush or (if they're really sadistic, which they usually are) dental floss.  Obviously, this is not candy, but your dentist does not give a shit.

Another one that's easily avoided are fruits.  This includes apples, oranges, and, yes, raisins.  Thanks to the horror stories of deranged neighbors putting razors, needles, and poison into fruit, which never happened, parents would always throw the apples and oranges out.  As far as those raisins are concerned, no kid in their right mind would eat them.  Even if you like raisins, the mushy, sticky, Halloween variety should be avoided like the plague.

The treats you really have to watch out for are those candies that, one way or another, fuck up your mouth like piranhas on a bloody stump.  First are the ones that will shatter your jawbone, like that fucking hard bubble gum (Bazooka gum is hard, but Dubble Bubble could cut diamond).  I fucking hate gum, especially bubble gum, especially bubble gum that breaks your goddamn teeth.  I remember those Bazooka Joe comics that came with every wrapper of Bazooka.  I just read the comics and threw the gum away.  That shit was terrible. 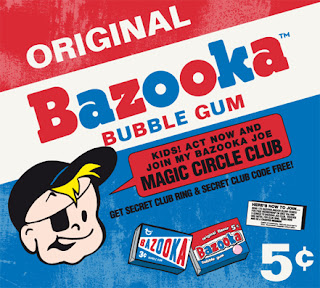 I don't know how you lost an eye, Joe, but I do know how I lost
my fucking teeth, you goddamn cyclops!
Then there's jawbreakers, which, in a reasonable size, aren't that bad.  But when you get one of those honking big jawbreakers, it's a fucking nightmare.  Either you end up dislodging your jaw or you're left with a slobbery ball of sugar that just collects dirt.  It's fucking nasty - they're not even that good.  What a waste of fucking time.

Speaking of bad tasting candy, there's a bunch of fucking candy that taste like shit.  Take Smarties or Necco Wafers; both of these candies are like the retarded cousins of SweetTarts.  They taste like chalk and they're fucking worthless.  Some people like Smarties, but that's because they're made with highly addictive narcotics.  Also, what the fuck was up with candy cigarettes?  Not only did they taste nasty, they were candy fucking cigarettes.  Nowadays, they're just called candy sticks, but they still taste like shit.  However, the crown for the nastiest fucking candy belongs to these motherfuckers... 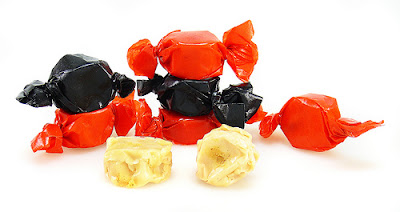 Gah!  Get that shit away from me!
If you ever see these abominations wrapped in black and orange in your Halloween bucket, throw them away, immediately.  They will rape your mouth.  They will rape and kill your mouth!  They're called Peanut Butter Kisses, but they're more more like Peanut Butter Cumshots (THEY WILL RAPE YOUR MOUTH!!!).  It's supposed to be molasses taffy with a peanut butter center (which sounds disgusting).  In reality, it's all of the sin and corruption of humanity made into candy form.
There's lots of other horrible candies and random crap, such as circus peanuts, Halloween pencils, wax lips, stale popcorn balls, religious pamphlets, etc., but do you know what the worst thing to hear when you're out Trick-or-Treating is?  It's the sound of a handful of pennies jingling in the bottom of your bucket.  What kind of lazy-ass, piece of shit motherfucker do you have to be to just fumble around for the change in your underwear drawer when kids come around on Halloween?  Some may rationalize, "Hey, it's money."  No, it's a motherfucking joke!  If you want to hand out money, hand out a $20 bill.  Nothing made me angrier on Halloween.  Either buy some fucking candy (good candy, dammit) or turn off your fucking porch light, because you don't have shit to give.  Believe me, Barabas Judas Priest would not be forgiving to these assholes.  They'll wish he only burnt their house down with them inside.
Okay, I need to step away from this.  I'm getting way too pissed off here.  Of course, who wouldn't be when you're listing the things you hate most about Halloween?  Thankfully, I'm done with this fuckfest.  The week's over and I can just forget all about the bullshit and just enjoy the holiday.  To all my Steel Legionnaires, don't wear a shitty costume, don't give out shitty candy, don't decorate your house like a fucking Christmas tree, and have a metal Halloween!
...or, should I say, HELLOWEEN!

Blood, Fire, and Steel!
Posted by Kaiser Crowbar at 7:58 PM

Email ThisBlogThis!Share to TwitterShare to FacebookShare to Pinterest
Labels: Sucktoberfest

Why does he kick so much ass?

Kaiser Crowbar
Forged from the Orichalcum of the gods, in the fires of a thousand suns, I arise. Imparted with the wisdom of ancient races across space and time, imbued with the strength and fury of the Cosmic Patriarchs, I bring salvation to the masses. Angels of steel rain down a chorus of heavy metal. Their music is the hymn, and my lyric is the Word. Rise, sons and daughters of the forsaken. The Kaiser has come.

I am on the Book of Face

Promote Your Page Too

Music of the Gods

Search the Ablogcalypse For the Charred Remains Of...

You can find Kaiser Crowbar listed at